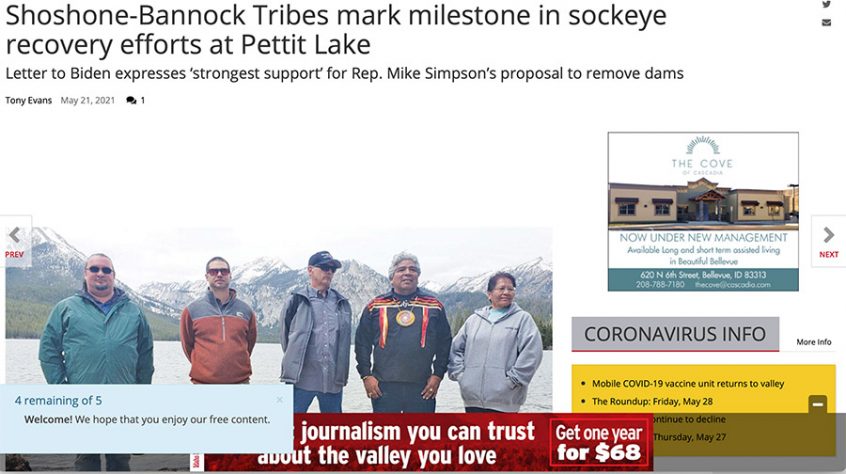 Advocates hope that Simpson’s proposal to remove four dams on the lower Snake River could ensure the salmon species’ resurgence—and restore a crucial component of the tribes’ legacy.

“Salmon is a big part of our culture and that is why we are here today,” said Shoshone-Bannock Tribes Fish and Wildlife Director Chad Colter while standing on the eastern shore of Pettit Lake.

Colter was joined by Shoshone-Bannock Business Council members Ladd Edmo and Elma Thompson, tribe Snake River Sockeye Manager Kurt Tardy and Policy Analyst Daniel Stone. A number of salmon and conservation advocates and friends from around the region joined in for the event.

Edmo delivered prayers before those gathered made speeches about the significance of sockeye for the tribes. The group then departed for a tour of a newly reconstructed $1.4 million fish weir designed to track and study outgoing smolts, or juvenile salmon, as they begin their 900-mile journey to the ocean.

Tardy conducted a tour of the weir, which will also be used to capture returning adult sockeye as they return to the lake two years later, after their arduous journey to their spawning grounds on the gravel shoals of Pettit Lake.

Staff from the Tribe Fisheries Department caught smolts as they wriggled downstream and into catchments at the weir, taking some to a nearby trailer where they were DNA-tested and tagged before returning the anesthetized fish to the stream.

Tardy said about 10% of smolts leaving now during the first spring flows are geo-tagged to monitor their location within the river system. About 30% are DNA-tested in a continuing effort to identify sockeye progeny to measure the success of ongoing sockeye recovery efforts at Pettit Lake.

“Two years ago, we saw only two fish return from Pettit Lake,” Tardy said. “Last year we saw 38 return. We want to increase that effort every year.”

Some 30 years ago, only one Snake River sockeye returned to the Sawtooth Valley, according to the tribes’ agenda report for the Wednesday gathering. Nicknamed “Lonesome Larry,” the fish was the sole survivor that year of the longest salmon run in the Columbia River Basin.

In 1991, the tribes petitioned the federal government to list sockeye as an endangered species and devote resources to promote their recovery. Later that year, the National Marine Fisheries Service listed sockeye under the Endangered Species Act as endangered, a listing that was reaffirmed in 2005 and 2015.

The tribal representatives on Wednesday praised early efforts by former Chairman Lionel Boyer and others to get the species listed. They also recalled early salmon recovery efforts by the late Doug Taki, former sockeye program manager, and the late Kenneth Ariwite, former lead technician for the Shoshone-Bannock Tribes’ sockeye program.

Sockeye recovery efforts at Pettit Lake, including construction of the weir, are part of a decades-long regional effort costing hundreds of millions of dollars and supported by state and federal agencies. It includes a captive breeding program that raises fish from eggs from returning adults in the Sawtooth Valley and releases them back to the river to restart their migration.

The weir at Pettit Lake was funded by the Bonneville Power Administration, in collaboration with the state of Idaho and the tribes. Many millions of dollars have been spent over the years on sockeye recovery, primarily by the BPA, which operates the four dams on the lower Snake River, considered by scientists and many tribes along the river corridor to be a major impediment to salmon migrations.

“Two years ago, we saw only two fish return from Pettit Lake. Last year, we saw 38 return. We want to increase that effort every year.”

Now, the Shoshone-Bannock Tribes are backing Simpson’s effort to breach four dams along the snake river and return a 140-mile stretch of slack water to riparian flows—a move the Congressman hopes will spur salmon recovery. On March 17, the tribal leaders sent a letter to President Joe Biden signed by tribal Chairman Devon Boyer expressing their “strongest support” for Simpson’s proposal.

“Our desire is to bring a measure of long-ignored environmental justice to our people and our homelands,” the letter states. It also supports the goal of creating a legislated infrastructure package that would allow updated energy production systems.

“Our constant duty as tribal leaders is to our Tribes and people, and to the vision we hold of a better future,” the letter stated.

The Nez Perce Tribe, which also has a culture and history based in part around salmon, also announced support for Simpson’s plan on Monday.

The sockeye recovery projects in the Sawtooth Valley are manifold. Recovery efforts at nearby Redfish Lake are overseen primarily by the Idaho Department of Fish and Game. The tribes run efforts at Pettit and Alturas lakes, which focus on natural spawning. Regardless of locality, both the tribes and the state work collaboratively to achieve a unified goal: sockeye salmon recovery, Tardy said last year.

“Typically, there is always a fitness difference between hatchery stock and wild stock,” Tardy said. “Nothing can beat a natural female.”