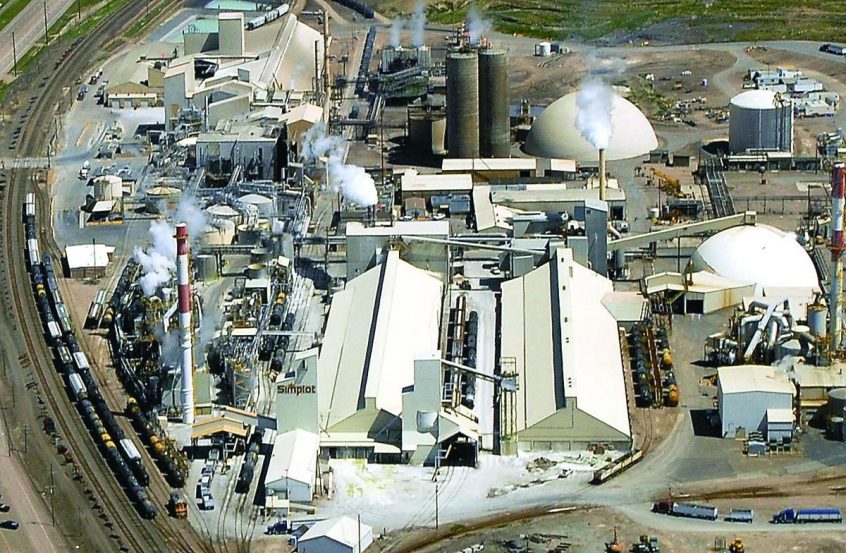 The Shoshone-Bannock Tribes, however, issued a statement indicating they plan to appeal the exchange. The tribes are concerned the agreement would pave the way for further pollution of an already contaminated site, imperiling cultural resources.

“We have concerns that have not been met or addressed and we will appeal,” tribal spokeswoman Randy’L Teton said Wednesday afternoon.

Among the cultural concerns, Teton said the agreement could lead to continued groundwater contamination reaching the Fort Hall Bottoms — sacred land where members of the Shoshone-Bannock Tribes go to exercise their hunting and fishing treaty rights.

Casey Hammond, principal deputy assistant secretary for land and minerals management with the BLM, traveled from Washington, D.C., to sign the record of decision at the Blackrock Canyon trailhead southeast of Pocatello at 10 a.m. Under the agreement, 714 acres of federal land adjacent to the Don Plant will be traded for more than 826 acres of Simplot’s land in the Blackrock Canyon area.

Hammond said Simplot will be providing 666.46 acres of land in the Chinese Peak-Blackrock Canyon area, in addition to another 160-acre parcel in the vicinity that it will be voluntarily donating.

Hammond said the agency is receiving prime recreational ground from Simplot, which should add several miles of trails for local outdoor enthusiasts to use, while also protecting valuable mule deer habitat. The major benefit of the exchange, he said, is that it will protect about 600 Simplot workers’ jobs and another 1,300 jobs that indirectly rely on the plant.

“The first and most important thing is it allows them to continue operating into the future,” Hammond said. “That’s very important to the community and the jobs (the plant) supports.”

Simplot will use the land for locating a new slag pile of gypsum waste rock, as well as new cooling ponds that should help the company reduce fluoride emissions from the plant.

“Through conversations and comments with the tribes they were able to convey the importance of those areas. … Working with different parties we were able to remove that area. That’s why it’s important to have an open and transparent process like this,” Hammond said.

Members of the local Portneuf Resource Council, however, argued in their public comments that the draft of the exchange was “slipped through” with little fanfare just before Christmas. The organization’s chairman, Mike Engle, said the group has concerns about impacts on local groundwater. In his group’s opinion, the slag pile’s originally proposed location was also moved without adequate evaluation.

“It’s something that is going to affect Pocatello for at least 80 years,” Engle said. “That slag mountain is going to be way bigger eventually, and more parts of Pocatello will be able to see it.”

Paul EchoHawk, an attorney representing the tribes on the issue, said the tribes plan to appeal the case to the Interior Board of Land Appeals. He acknowledged administrative appeals are difficult. Nonetheless, EchoHawk said a prior tribal appeal stopped a previous attempt by Simplot and the BLM to make a land exchange about a decade ago.

“The tribes strongly oppose the Blackrock land exchange, which will expand an existing Superfund site that’s on the national priorities list as one of the most highly contaminated sites in the country,” EchoHawk said. “There is no agreement with the tribes regarding protection of cultural resources in the land exchange. There was some consultation that occurred, but the concerns of the tribes were not addressed in the final (environmental impact statement) and will not be addressed in the record of decision.”

The BLM also approved a record of decision to expand Simplot’s Smoky Canyon Mine in Caribou County in late July. Hammond emphasized that modern mining plans contain far more safeguards than were used in historic mining.

“We continue to advance, grow and enhance our knowledge of how to do things in a more responsible and mature way,” Hammond said.

A Simplot spokesman could not be reached for comment at press time.