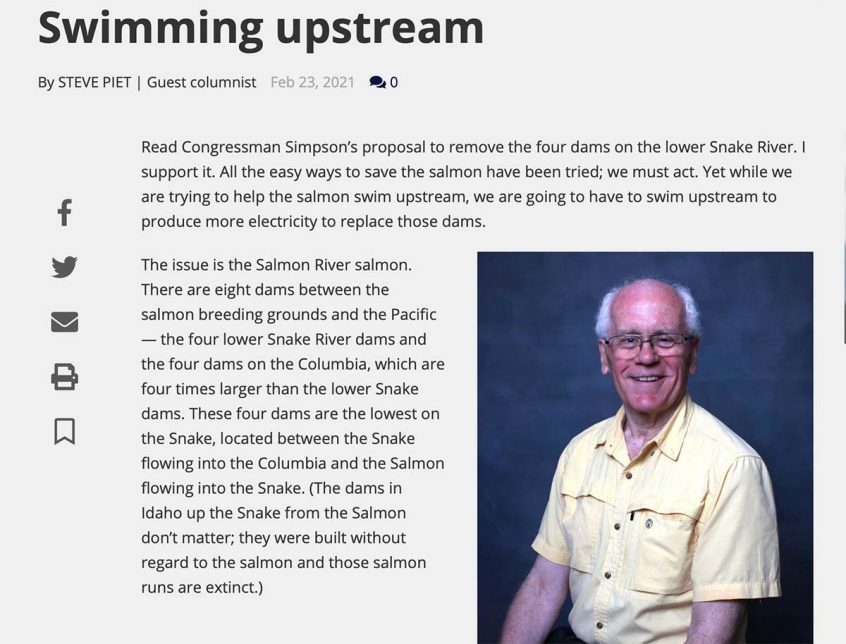 Read our media share of guest columnist Steve Piet for the Post Register. The original article is located at:

Read Congressman Simpson’s proposal to remove the four dams on the lower Snake River. I support it. All the easy ways to save the salmon have been tried; we must act. Yet while we are trying to help the salmon swim upstream, we are going to have to swim upstream to produce more electricity to replace those dams.

The issue is the Salmon River salmon. There are eight dams between the salmon breeding grounds and the Pacific — the four lower Snake River dams and the four dams on the Columbia, which are four times larger than the lower Snake dams. These four dams are the lowest on the Snake, located between the Snake flowing into the Columbia and the Salmon flowing into the Snake. (The dams in Idaho up the Snake from the Salmon don’t matter; they were built without regard to the salmon and those salmon runs are extinct.)

At about the same time as the dams would be breached, the Idaho Falls Power contract with Bonneville Power Administration expires in 2028. This complicates our replacement negotiations.

Whether we like it or not, there will be no new fossil (natural gas, coal, petroleum) anything in the U.S. under the Biden administration. Even without congressional action, Biden’s regulatory authority will prevent any new fossil pipelines, refineries or power plants. It will accelerate the closing of existing facilities. We must replace both planned and accelerated shutdown of several western coal plants, each of the scale of replacing the four lower Snake River dams.

The four dams generate about 1000 megawatt electric-year of electricity each year. Like nuclear, natural gas and coal, those dams’ electricity is available as demand goes up and down, without regard to daylight or wind. They cannot be reliably replaced with windmills, solar or other fantasies. Wind and solar would require battery storage on a scale that does not and cannot exist.

Only nuclear power plants can replace those four dams. We’d need one and a half of the small modular reactor power plant proposed west of Idaho Falls.

We need one of those plants already to address the needs of Idaho in general and Idaho Falls in particular. Idaho imports a greater fraction of its electricity than any other state, putting us at the mercy of other states and federal regulators. The proposed SMR would substantially reduce Idaho imports.

Idaho Falls produces one-third to one-fourth of our electricity with our four local dams and a tiny share of the windfarms east of town. It buys the rest. Our mayor and city council are going in the wrong direction by cutting our city’s participation in the SMR proposal.

Steve Piet is a nuclear engineer who worked at Idaho National Laboratory for 31 years.